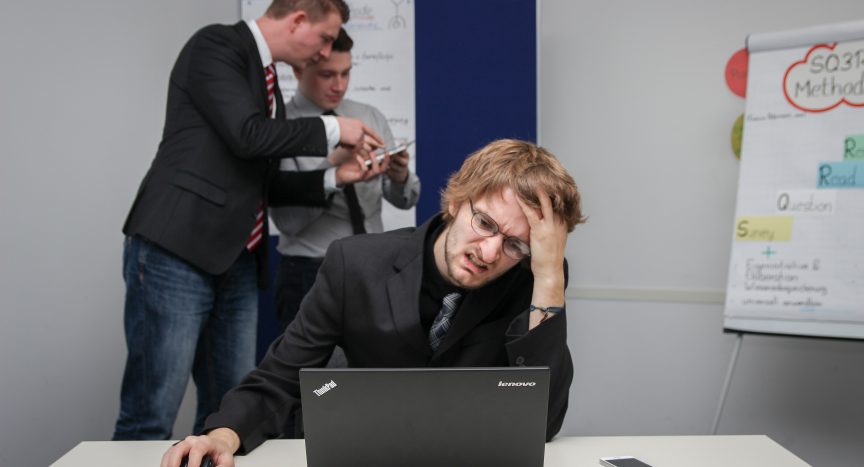 Can’t stand your job? Maybe the problem’s not the job, but the job-fit. Here are ten symptoms to check out.

By definition, a job that fits you is one that energizes you and brings satisfaction because it calls for strengths you enjoy using and allows you to work in conditions where you thrive.

Here are some obvious signs of misfit:

1. You hate your job

Don’t laugh! I once worked with a man who told me that every morning when he got to work, he got sick to his stomach in the company parking lot. You might say that his gut was literally telling him he was in the wrong job.

If you woke up this past Monday morning and said, “I hate Mondays!” you were probably just avoiding the truth: what you really hate is your job. If you didn’t, you’d look forward to going back to it.

Sadly, too many people think that work is not supposed to be satisfying. As the saying goes, “Why do you think they call it ‘work’?”

If that’s how you feel about work, let me tell you that somehow you have bought into a lie. Work was never intended to be a curse, but a gift. I know there are a thousand things that can turn work into something awful. But work itself turns out to be hugely rewarding—if (big if!) you’re doing work that has your name on it.

If you hate your job, you’re doing the wrong job for you. It’s that simple.

When you’re heart’s not in your job, you find excuses not to do it. The path of least resistance is to linger over coffee with a coworker, to take an extra half-hour for lunch, to set an appointment such that it gets you out of the office early, etc.

3. You get lots of complaints about your work

Mistakes happen. But they’re not supposed to happen often, and they certainly don’t keep happening when someone is gifted to the task. We’ve all had the waitress who gets all the orders wrong. We’ve all watched the weatherperson who couldn’t get the right screens punched up. When we were in school, we all sat under the teacher who was so boring even his dog ran away.

You may just call those people incompetent—and they are—but a display of incompetence is one of the surest signs that someone is in the wrong job.

If you’ve got a lot of dissatisfied customers, if your boss is constantly “riding you” because she says you’re not getting the job done, if your coworkers always have to remind you about balls that you’ve dropped, if you’re routinely turning in your assignments late, if you’re having to spend a lot of extra time correcting mistakes—consider that you may be trying to do a job that just doesn’t fit you.

I don’t know why, but one of the most common things people tell me about themselves when they call The Giftedness Center is that they are ADD or ADHD (for attention deficit disorder or attention deficit hyperactivity disorder). I’m not  doctor, so I take their word for it.

But here’s what’s interesting: whenever someone is functioning in the “sweet spot” of their giftedness, they have absolutely no problem focusing on the task. I’ve never seen a case otherwise.

Which tells me that if someone is having a difficult time staying on-task in their job, that’s probably a sign they are in the wrong job.

And boy, have I seen lots of cases of that! There’s the lady who is never at her cubicle, but instead wanders around the office all day looking for people to engage in conversation. There’s the guy who gets up from his desk every ten minutes to go get another cup of coffee. There’s the person who keeps checking her Facebook page. And of course we all know coworkers who waste time by surfing the Internet and doing their shopping on-line (of course, we would never do that!).

Some people think that focus is just a matter of discipline. But it’s not. Focus is a function of fit. If a task fits you well, you stay locked on it, because you’re gaining energy from it. But if you’re doing work that doesn’t fit you, it’s easy to become distracted because you have no skin in the game, motivationally speaking.

5. Feeling a sense of, what’s the point?

When we talk about motivation, we’re talking about human energy directed at a purpose. There’s an aim in view. Achieve that aim, and life makes sense.

But suppose no matter how many times the marksman aims at the target, he never hits it. Suppose the salesperson never closes a sale. Suppose the teacher never sees any of her students “get it.”

Does anybody really want to do a job that doesn’t accomplish anything?